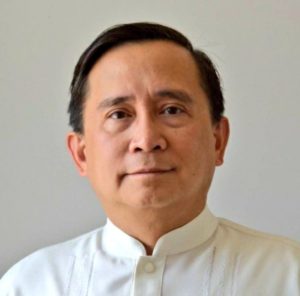 Ambassador Evan P. Garcia assumed his current position as Philippine Ambassador to the United Kingdom on 3 May 2016.

He is a senior member of the Philippine Foreign Service, having recently served as Undersecretary for Policy at the Department of Foreign Affairs in Manila. Prior to this, he was the Philippine Ambassador and Permanent Representative to the United Nations (UN) and other International Organizations in Geneva.

A career diplomat, Ambassador Garcia was previously assigned to the Philippine diplomatic missions in Tokyo and Washington DC. He is a recipient of the Philippines’ Gawad Mabini awards, with the rank of Dakilang Kasugo (Commander) and then Dakilang Kamanong (Grand Cross) for his substantive contributions in promoting the interests of the Republic of the Philippines at home and abroad.

Born in Vietnam, Ambassador Garcia is married to Jocelyn Batoon-Garcia, a fellow Filipino diplomat, with whom he has one son.

At the PBBC meeting, Ambassador Evan Garcia (EG) thanked NR and other PBBC members and guests for the warm welcome. He commended NR and his team for their leadership and commitment to the PBBC over the years.

The new Philippine Ambassador who is now on his fourth diplomatic posting (he was previously assigned to Genera, Washington DC, and Tokyo) said that he was advised by his predecessors to work closely with PBBC members in promoting closer Philippine-British economic cooperation.

Ambassador Garcia gave a brief update on important developments in the Philippines since the last PBBC meeting, viz: