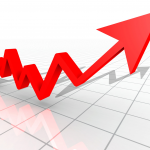 Exports of goods recovered with a growth of 8.7 percent for the year from a contraction of 4.2 percent in 2011.  Exports of services grew by a remarkable 9.8 percent, more than twice the growth the previous year.