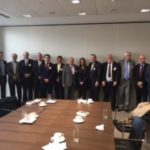 • Manufacturing, Trade, and Real Estate, Renting and Business Activities were the main drivers of growth for the quarter.

• Among the major economic sectors, Industry recorded the fastest growth of 7.5 percent followed by Services with 7.1 percent growth. Meanwhile, Agriculture slowed down by 2.5 percent from 3.0 percent growth in the previous year.

• Net Primary Income from the Rest of the World (NPI) grew by 5.7 percent compared with the 4.1 percent growth recorded in the same quarter of the previous year. As a result, Gross National Income (GNI) posted a growth of 6.7 percent.

• With the country’s projected population reaching 104.9 million in the third quarter of 2017, per capita GDP grew by 5.4 percent. Meanwhile per capita GNI and per capita Household Final Consumption Expenditure grew by 5.2 percent and 3.0 percent, respectively.

• The year-on-year headline inflation at the national level further accelerated by 3.5 percent in October 2017. In the previous month, inflation was posted at 3.4 percent and in October 2016, 2.3 percent.

• The indices of the following commodity groups recorded higher annual increases during the month: Alcoholic Beverages and Tobacco (6.8%); Housing, Water, Electricity Gas and Other Fuels (4.0%); Communication (0.4%); Recreation and Culture (1.5%); and Restaurant and Miscellaneous Goods and Services (2.6%).

• As of July 2017, the unemployment rate inched up to 5.6 percent from 5.4 percent a year ago as more Filipinos joined the labour force.

• Estimates showed that 94.4 percent of the labour force population were employed in July, slightly down from 94.6 percent last year.

• From January to October, revenues rose by a tenth to P2.007 trillion from last year’s P1.821 trillion.

• The collections of the bureaus of Internal Revenue and of Customs, the country’s two biggest tax-collection agencies, increased 17 percent year-on-year to P142.5 billion and 29 percent to P42.9 billion, respectively.

• Foreign direct investments (FDI) grew by 182.7 percent to US$674 million in June 2017 from US$238 million for the same month in 2016, reflecting investors’ continued bullish outlook on the Philippine economy.

• On a cumulative basis, FDI registered net inflows of US$3.6 billion in the first half of 2017. This was 14 percent lower than the US$4.2 billion net inflows posted in the same period last year on account of the 90.3 percent decline in net equity capital to US$141 million from US$1.4 billion a year ago.

• The country’s foreign exchange buffer improved to a three-month high of $81.51 billion in August, $447.9 million higher than the revised $81.06 billion recorded in July.

• The latest gross international reserves level was the highest since hitting $82.18 billion in May.

• The build-up in reserves was due mainly to inflows arising from the revaluation adjustments on the Central Bank’s gold holdings resulting from the increase in the price of gold in the international market.

• During the first seven months of the year, personal remittances from Overseas Filipinos increased by 5.9 percent at $17.9 billion, compared to the same period last year.

• The sustained increase in OF remittances was supported by stable demand for skilled Filipino workers abroad.

• Consistent growth is observed by the Philippines’ inbound traffic with a total of 2,8 million visitors for the first five months of 2017. This volume registered double-digit increase of 14.43% from the 2,5 million count for the same period last year.

• The biggest volume was recorded in the month of January while the highest growth was registered in April. Another milestone was achieved by the industry as month to month arrivals has surpassed the 500,000 visitor volume for the first five months of the year.

• Arrivals from the UK have reached 82,000 within the said period. The UK still ranks as the 8th top visitor market for the Philippines.