Her Majesty Queen Elizabeth II has recognised Ambassador Jesus Paraiso Tambunting as an Officer of the Order of the British Empire. This honorary award entitles him to be known henceforth as Jesus P. Tambunting OBE. 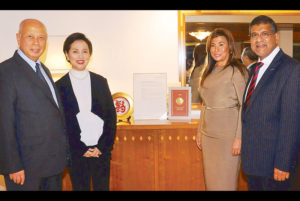 British Ambassador, Asif Ahmad, conducted the formal ceremony in the presence of Ambassador Tambunting’s family and friends in Manila in May. He said:

Chuching Tambunting and I have known each other for over 13 years. He has been a great friend of the United Kingdom and the award of this OBE is a visible and permanent symbol of our deep appreciation. Ambassador Tambunting has been with us in London, Singapore, Hong Kong, Manila and Davao as we promoted business opportunities between the UK and the Philippines. We share a passion for enlarging links between our respective small and medium sized enterprises. This is a proud moment for the Tambunting family and his many friends will join me in extending my congratulations to him.

In my time as Ambassador in the Philippines, we have consolidated our position as the largest investor in the country from the EU. In 2015, growth in UK exports to the Philippines was the second highest in the world. From a tiny base, we have seen three large investments into the UK from the Philippines totalling more than 60 billion Pesos. These are tangible indicators of the role Ambassador Tambunting has played in enhancing our commercial ties.

I am deeply honoured to be the recipient of this very prestigious award. It was a privilege to have served my country in promoting and strengthening the commercial relationship between the Philippines and a country I admire, the United Kingdom of Great Britain. I was a banker for most of my professional life and I was more than happy to use my knowledge in finance and investments to strengthen the ties between our two countries.

Ambassador Tambunting is Chairman of Capital Shares Investment Corporation, an investment and management company. He was Chairman of Planters Development Bank, the Philippines’s leading bank for promoting and growing SMEs, which he founded in 1971. He was previously appointed by President Benigno Aquino III to Head the Philippine Department of Trade’s Small Business Corporation. Other roles include being a member of the Board of Trustees of the Carlos P. Romulo Foundation, Philippine Business for Education, PinoyMe Foundation, ABS-CBN Bayan Foundation and Makati Medical Center Foundation. He is a member of the Makati Business Club National Issues Committee. From 2004 until May 2008, he served as Chairman of the Association of Development Financing Institutions in Asia and the Pacific, a regional organization of 127 development banks and institutions in 44 countries. He was elected to the Board of Directors of BPI-Philam Life Assurance Inc. in 2009.

Ambassador Tambunting was conferred Master Entrepreneur and Entrepreneur of the Year 2009 by the British firm, Ernst & Young and the SGV Foundation, and inducted into the World Entrepreneur Academy in Monaco in June 2010. He also received the International Alumnus Award from the University of Maryland in April 2011, the first Ramon V. del Rosario Sr. Award in Nation Building in 2010, the Distinguished Person of the Year 2009 from the Association of Development Financing Institutions in Asia and the Pacific, the Management Man of the Year 2003 from the Management Association of the Philippines, the Lifetime Achievement Award for 2005 from the Asian Bankers Association, the Distinguished Service Award from the Department of Foreign Affairs and “Knight Commander with Star” in 2008 and “Knight Grand Cross” in 2016 from the Equestrian Order of the Holy Sepulchre of Jerusalem.